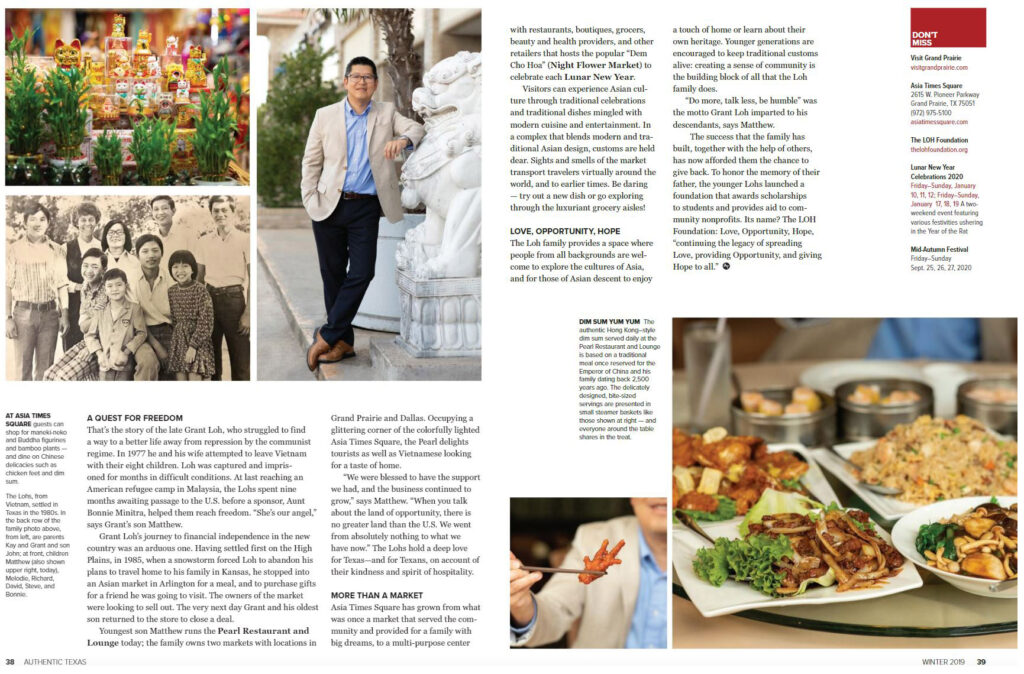 At the Pearl Restaurant, one group of diners converses animatedly in Vietnamese. At the next table over, a server delivers a steaming serving of dim sum, little jewels in a round basket. The Youngsters are restless, eager to go try out the carnival games before the Flower Festival gets underway at dusk.

No, it’s not Saigon – but Asia Times Square, one of the largest Asian markets in Texas, centered in the immigrant enclave of Grand Prairie between Dallas and Ft. Worth.

While manufacturing and high-Tech industry have recently brought an influx of far eastern and southwest Asian workers to the area, many Vietnamese families arrived here in the mid-1970’s, fleeing the humanitarian crisis in their native country and looking to escape communism. According to the Migration Policy Institute, the Dallas-Fort Worth-Arlington metropolitan area today has the fifth largest population of Vietnamese immigrants in the United States.

A Quest for Freedom

That’s the story of the late Grant Loh, who struggled to find a way to a better life away from repression by the communist regime. In 1977 he and his wife attempted to leave Vietnam with their eight children. Loh was captured and imprisoned for months in difficult conditions. At last reaching an American refugee camp in Malaysia, the Lohs spent nine months awaiting passage to the U.S. before a sponsor, Aunt Bonnie Minatra, helped them reach freedom. “She is our angel”, says Grant’s son Matthew.

Grant Loh’s journey to financial independence in the new country was an arduous one. Having settled first on the High Plains, in 1985, when a snowstorm forced Loh to abandon his plans to travel home to his family in Kansas, he stopped into an Asian market in Arlington for a meal, and to purchase gifts for a friend he was going to visit. The owners of the market were looking to sell out. The very next day Grant and his oldest son returned to the store to close the deal.

The family owns two markets with locations in Grand Prairie and Dallas. Occupying a glittering corner of a colorfully lighted Asia Times Square, the Pearl delights tourists as well as Vietnamese looking for a taste of home.

“We were blessed to have the support we had, and the business continued to grow,” says Matthew, the youngest son. “When you talk about the land of opportunity, there is no greater land than the U.S. We went from absolutely nothing to what we have now.” The Lohs hold a deep love for Texas – and for Texans, on account of their kindness and spirit of hospitality.

More than a Market

Asia Times Square has grown from what was once a market that served the community and provided for a family with big dreams, to a multi-purpose center with restaurants, boutiques, grocers, beauty and health providers, and other retailers that hosts the popular “Dem Cho Hoa” (Night Flower Market) to celebrate each Lunar New Year.

Visitors can experience Asian Culture through traditional celebrations and traditional dishes mingled with modern cuisine and entertainment. In a complex that blends modern and traditional Asian design, customs are held, dear. Sights and smells of the market transport travelers virtually around the world, and to earlier times. Be daring – try a new dish or go exploring through the luxuriant grocery aisles!

The Loh family provides a space where people from all backgrounds are welcome to explore the culture of Asia, and for those of Asian descent to enjoy a touch of home or learn about their own heritage. Younger generations are encouraged to keep traditional customs alive: creating a sense of community is the building block of all that the Loh family does.

“Do more, talk less, be humble” was the motto Grant Loh imparted to his descendants, says Matthew.

The success that the family has built, together with the help of others has afforded them the chance to give back. To honor the memory of their father, the younger Lohs launched a foundation that awards scholarships to students and provides aid to community nonprofits. Its name? The LOH Foundation: Love, Opportunity, Hope, “continuing the legacy of spreading Love, providing Opportunity, and giving Hope to all.”

Celebration of the Lunar New Year

Year of the Ox The Ox is the second of all zodiac animals. According to one myth, the Jade Emperor said the order would be decided by the order in which they arrived to his party. The Ox was about to be the first to arrive, but Rat tricked Ox into giving him a ride.… 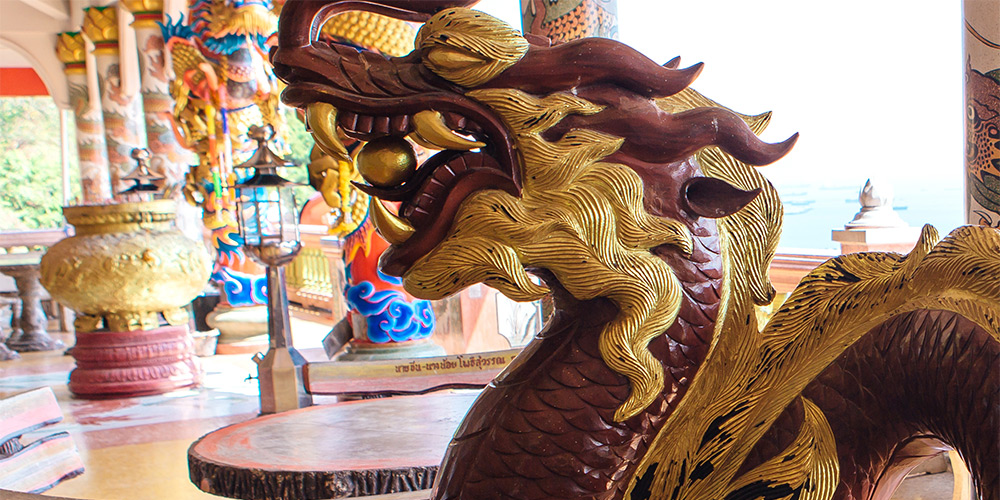 It is the Year of the OX. With it comes hope for a brighter and healthier future. Though this event will be scaled down to follow the Center for Disease Control guidelines, we will be celebrating this event with food, entertainment, and Lion and Dragon Dancers. 2021 Asia Times Square Lunar New Year Agenda This…